A Tale of Two Champions in the Borgata Poker Room

Woroch, 40 of Cedar Knoll NJ and who goes by the online screen name onetime99, won his way into the Next Poker Millionaire Semi-Final through a BorgataPoker.com 1-Point Entry Tournament on December 19th, and then outlasted a field of 2,177 players on January 5th to secure his seat at the final table played live in the Borgata Poker Room.

Woroch competed in an eight-seat final table with four other participants who qualified through BorgataPoker.com, and an additional three from its partner site, PartyPoker.com.

He ended up in a heads-up battle with player Steven Edwards that ended relatively quickly when he flopped a nut straight. You can get a rundown from Poker News here.

“It was truly a surreal experience when I knew that I had him beat,” Woroch told us. “When that final card came out my emotions were just running wild; I have to thank BorgataPoker.com for putting on this awesome tournament.”

The tournament was a milestone for Woroch, who said he’s never won more than $7,000 in a poker tournament before, but also for BorgataPoker.com, the leader in online poker play in New Jersey.

“New Jersey’s Next Poker Millionaire signifies a historic event in the evolution of internet gaming,” said Borgata Director of Poker Operations Vince Alonge. “We are ecstatic to be able to offer our online community the opportunity to compete for a million dollar prize package here at Borgata, especially in a tournament of this magnitude. 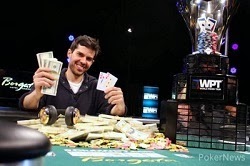 As for Murella, he takes the more conventional way to winning $842,370 by taking the 2014 Borgata Poker Open Championship. A Winter Poker Open record 1,229 players turned out for the event generating $4,055.700 in prize money. Here’s more on Murella’s win.

There’s only one place in Atlantic City crowning poker champions like these.